Your cart has expired
Your order has expired, and your shopping cart has been emptied. Please visit our Events page to continue shopping.
Close 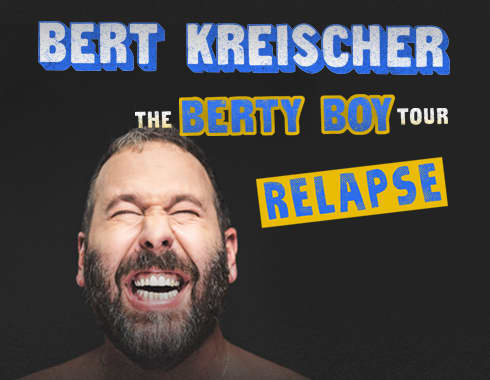 Bert Kreischer: The Berty Boy Tour has been rescheduled for Thursday, October 14th. Previously scheduled dates include March 29, 2020, August 1, 2020, February 27, 2021 and August 27, 2021. Ticket holders for any of the previously scheduled dates should hold onto their original tickets and they will be honored for the new date. Please contact the Paramount Theatre ticket office with questions by September 30, 2021.

In addition, due to popular demand, a THIRD show on October 13th has been added!

BERT KREISCHER is an American stand-up comedian, actor, writer and host who performs to sellout crowds across the country. His standup specials “Secret Time” and “The Machine” are currently streaming globally on Netflix. Described as having a “rare and incredible talent” (Interrobang), Bert has evolved from being named Rolling Stone’s 1997 “Number One Partier in the Nation” to one of the top names in comedy. Between his two previous stand-up specials, “The Machine” on Showtime (2016) and “Comfortably Dumb” on Comedy Central (2009), his two podcasts: “Bertcast,” and “Open Tabs,” his YouTube cooking show: “Something’s Burning,” his book Life of the Party: Stories of a Perpetual Man-Child (2014), Bert has succeeded in finding the elusive blend of “being a cringe comedian with real insight” (Interrobang). Lauded as one of the best storytellers of his generation, Bert seamlessly and sincerely shares anecdotes about his family and fatherhood while showing his ability to prove “that there’s a way to take his [party-boy] antics into middle-age,” (Forbes). His infamous story about robbing a train with the Russian Mafia was recently optioned by Legendary (the studio behind The Hangover Series, Jurassic World, and Straight Outta Compton) to be turned into a movie. After the successful debut of The Body Shots World Tour in 2019, where he quickly sold out theaters and added shows in almost every market, Bert is launching a brand new tour in 2020, The Berty Boy Tour, where he will do shows in even larger venues across the country. Tickets can be found at BertBertBert.com.

Let us choose seats for you

Are you sure you want to remove this seat from your selection?

Choose your own seat

There was an unknown error while attempting to reserve your seats.
If you find this message in error, please check your reservation request and try again.
This field is required.
The amount must be greater
Please enter a number that contains a decimal (XX.XX).